The Austerley and Kirkgordon series is really a tribute to H P Lovecraft, an author who changed fantasy with his grim worldview and dour creatures of unimagineable horror. Whilst I disagree with Lovecraft’s worldview, his writing style has been an inspiration.

A former bodyguard meets a professor of the occult to face deadly forces from beyond as the world’s only hope to avoid. Recruited into the strange world of SETTA, the government’s paranormal department, they meet a menagerie of strange people and creatures whilst trying to keep their self-loathing at bay.

Together, professional protector and skilled archer Kirkgordon and obsessed, unkempt Austerley depend on each other as their world changes around them with nightgaunts, demons, witches and a host of bizarre creatures walk the earth. From Russia to America, the English seaside to Scottish lochs and then to places unknown and unheard of the adventure races along its many twists and turns.

With a professional editor (Caroline Orr) and a top notch artist (Jake Clarke) on board, the series currently includes 2 novels, 2 origin stories with a third novel and origin story currently in production. 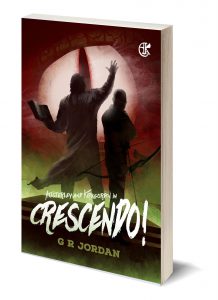 A long forgotten manuscript of music. A genius professor hungering for the dark creatures which drove his studies. A Russian vamp with an icy touch. A government agent pulling everyone’s strings. And a former bodyguard trying to hold onto his marriage amidst Elder creatures threatening the end of the world.

Join Austerley and Kirkgordon on a hunt for Elder music of a race lost from time. From America to Russia and across the British Isles, two broken misfits try to pull the world back from a cosmic disaster while keeping at bay their reciprocal loathing.

It’s the blasphemous fanfare for the end of the world! 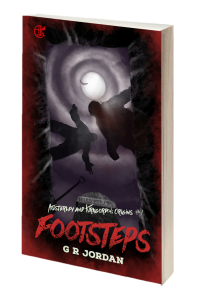 “I swear if I see Austerley again, I’ll kill him myself. The man’s a lunatic, and he wants putting down for the good of society – and his own good for that matter.”

A retired protection operative, Kirkgordon’s only mistake was to seek a little of the excitement his previous life had offered. Leaving his family behind, he joins Professor Austerley beneath a New England graveyard and fights horrors he could never have dreamed of. But while he seeks to extract his client from the madness, the Professor shows a hunger for things unholy, an insatiable appetite that chills Kirkgordon to the core.

“Footsteps” is the prelude to “Crescendo!”, the first story in the Austerley & Kirkgordon series, and relates the tale of their first bizarre meeting from the perspective of a compromised Kirkgordon. Drawing on the Lovecraftian lore, this short tale introduces the reader to the conflicted pair, one desperately seeking the wonder of darker things, and the other, horrified by the wild chaos he has become involved in.

Fittingly, Footsteps is told as a modern day police statement, made by Kirkgordon, as the pair follow the path formerly taken by Harley Warren and Ranolph Carter.

The Darkness at Dillingham 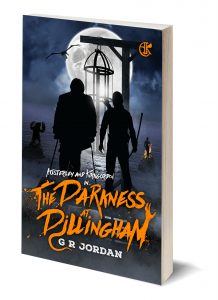 A town’s checkered history with a vengeful privateer. An invalid’s obsession with his missing foot. A care home assistant laying down the heat. A bizarre priest with a teenage daughter. A government agent seeking his missing employee. And a protector who finds he’s a witch’s next lover.

Join Austerley & Kirkgordon in their second full-length adventure at the English seaside town of Dillingham. Resting before Austerley’s prosthetic foot operation, the boys find a lingering presence trying to take back the town that destroyed it. Ghosts, witches, a redoubtable librarian, monsters aplenty and a descent into hell all add up to give the team more headaches than they can handle. This is one vacation they’ll never book again. 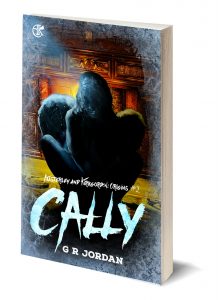 Taken from her home and family during an attack, Calandra grew up in the land ruled by Ferrean’s father where she trained to be a warrior. Now she serves under Ferrean’s rule but he has made advances that she is more to him than a warrior. Trying to find their way in this new relationship, they are confronted by a depressed land devoid of its children who have been taken by a force unknown. Together the pair are pushed to the extreme to rescue these children before the shattering conclusion in the mother of all storms!

“Cally” is the origin story of Calandra, ice cold warrior and possessor of freakish wings, the feminine hero of the “Crescendo!” novel, the first in the Austerley & Kirkgordon series. Discover where her sadness and sorrow come from and how she changed from a normal woman to the figure of Austerley’s amazement in the blink of an eye.

The third in the current Austerley and Kirkgordon series is written and just awaiting editing and publishing. This time the boys are going outside the realms of the normal world in the hunt for a loved one! Release is scheduled for October and if you want to be one of the first to get a copy then get on my mailing list. You’ll receive offers, information about new releases and some fun stuff and of course you can unsubscribe any time you like.